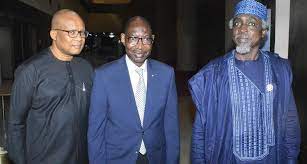 Mr Luqman Mamudu a former acting Director-General of the National Automotive Design and Development Council has stated that a multi-billion naira land and imported equipment for projects across the country are sat rotting away.

This was what he portrayed in Abuja where chief executive officers of auto companies and other stakeholders called for a review of the Finance Act, which would make it harder for the local auto assemblers to compete against sellers for fully finished vehicles that had been imported.

At the Auto CEOs Forum, the discussion was held as an interactive session between some big names. The heads of different government agencies, the likes of Nigeria Customs Service, Bureau of Public Procurement and National Drug Law Enforcement Agency, National Bureau of Statistics, National Automotive Design and Development Council and Ministry of Industry Trade and Investment.

Mamudu said the Federal Government invested billions of naira to acquire the huge land and import needed equipment for industrial clusters in six major cities across the country to give the auto policy a sound footing.

Mamudu has stated that regardless of the mammoth amounts spent, (N1 billion to bring in test equipment for a facility to test vehicles emission level, the government also paid N300 million for the land where test centre is) that nothing was currently happening at the Lagos centre and at other places.

His view was against the insinuated opinion that the NADDC didn’t consult anyone prior to the auto policy being put in place, saying there was around 6 months of back and forth meetings with relevant agencies, groups and auto players first.

Outlining the key areas of the policy, its objectives using a global template and the requirements to actualise the project such as incentives to attract investors/OEMs, acceptable credit facility for vehicle assemblers and buyers and anti-smuggling programme.

He said, “There is no need to change the NAIDP. We only need to review time taken for renewal of yearly.

“There is no way local assembly plants can compete with FBU vehicle importers at 10 per cent duty. We buy diesel, pay workers, among other running cost but they don’t do,” said Ajayi.

They called for a review of the Finance Act.

To find out more about the 2023 edition Click Here